Manufacturing jobs have a reputation—and it's often not complimentary.

The clichéd image of a manufacturing job is of dirty, backbreaking, low-paying labor. And women need not apply—it's an industry dominated by men. But separating fact from fiction about the actual people behind the welder's mask and on the assembly line can be tricky.

One of the above statements is true, but only one. Do you know which? 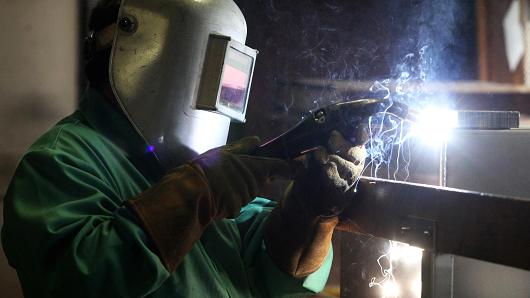 Myth No. 1: Manufacturing jobs are low-paying.

Reality: According to a congressional report by the Joint Economic Committee in 2013 (the latest year for which data is available), hourly compensation is 17 percent higher in manufacturing than in other industries.

What does that translate to as an average annual salary? More than you might think. According to the National Association of Manufacturers (NAM), as of 2013, the average manufacturing worker in the United States earned $77,506 annually, including pay and benefits.

The congressional report also noted that "manufacturing jobs are more likely to come with benefits, including medical and retirement benefits, than service-sector jobs. They also are more likely to require on-the-job training than jobs in other segments of the economy."

Myth No. 2: Manufacturing jobs have a similar low-skilled profile, with limited opportunities.

Reality: "The reality is that today's manufacturing workers are as likely to operate robots as they are wrenches, and use math more than muscle—this isn't your grandpa's factory floor," Sen. Klobuchar said in her email.

Read MoreThe true state of the manufacturing renaissance: Not what you think

In an effort to address this shortage and improve manufacturing technologies, President Obama created the Nationwide Network for Manufacturing Innovation (NNMI). It works with the National Institute of Standards and Technology (NIST) on a network of manufacturing hubs that receive government funding and private-matching funds and connect to colleges and universities to educate and train workers in technology—whether automotive aeronautics or textiles—that will be necessary for the future.

Dr. Frank W. Gayle, deputy director of the Advanced Manufacturing National Program Office (AMNPO), which administers the National Network for Manufacturing Innovation, said, "You don't need an engineering degree, or even any degree, to work in advanced manufacturing, although of course it is helpful. We want kids to know that these jobs are available, that they are plentiful, and they lead to a rewarding and reliable career."

Gayle said there are a handful of regional centers operational right now, but the initiative is expanding nationwide, with 45 centers planned over the next 10 years.

Myth No. 3: Manufacturing is a male-dominated industry.

Reality: Manufacturing is a male-dominated industry.

GM CEO Mary Barra might be a high-profile head of an iconic manufacturing company, but she's the exception to the rule. Women currently hold a mere 27 percent of manufacturing jobs, according to the congressional report—only 17 percent hold board seats, only 12 percent are executive officers, and just 6 percent are CEOs.

For an occupation that offers so much opportunity, why aren't more women in this sector?

In August 2014, Women in Manufacturing (WiM) surveyed 877 women to uncover the divide between young women choosing a career and women with experience working in the manufacturing industry. Less than 10 percent of women in the 17-to-24 age range selected manufacturing among their top five career fields—less than half thought the work would be interesting or challenging.

Among women already in the manufacturing sector, 82 percent said they found their field offered interesting and challenging work. Additionally, 74 percent of women felt it did in fact offer multiple career opportunities.

"We need to expand mentoring programs, improve workforce training and strengthen science, technology, engineering and math education so that more women and girls can see this sector for what it is: increasingly high-tech, innovative and critical to the future of our economy," Sen. Klobuchar said.